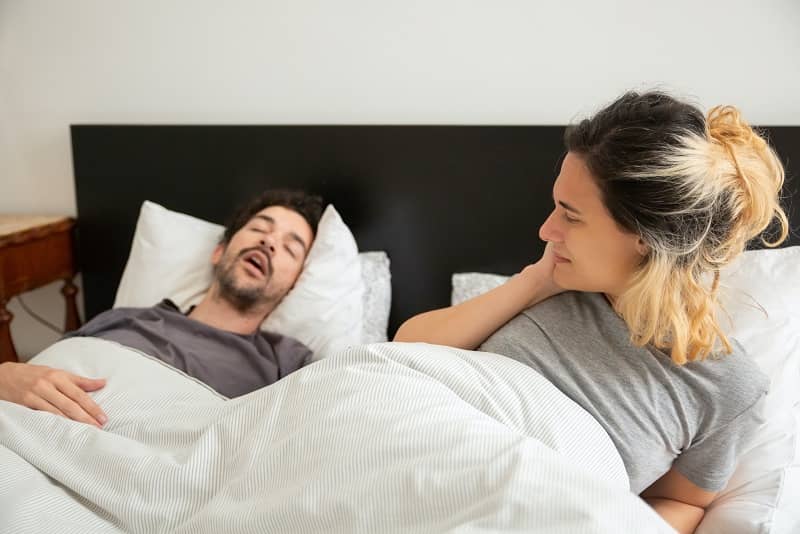 Sleepless and disturbed nights due to those loud snores?

Well, you are not alone.

Snoring while sleeping is a common problem across the world.

It disrupts your sleeping patterns and becomes a nuisance not only for you but for your partner as well.

But is snoring normal and can snoring cause health problems?

Certainly snoring is not normal and yes it can cause some health problems.

Moreover, where snoring is common among men, it is unusual in women.

Due to which it is essential to know the reasons for snoring in females.

There are a lot of health risks associated with consistent snoring which are often ignored or remain undiagnosed.

However, it is our ignorance that leads to this as we consider snoring to be only a “noisy” problem.

Accompany us to know what health problems can snoring cause.

What Is Sleep Apnea?

Before we delve into discussing the health issues associated with snoring, we should know when snoring becomes harmful.

Slight noises while sleeping will do no actual harm but consistent snoring is itself a disease.

Sleep apnea is a potentially critical sleeping disorder that affects your breathing.

When you suffer from this disorder, your breathing stops and starts repeatedly during sleep.

The symptoms may include tiredness after a full night’s sleep and consistent loud snores while sleeping.

It is a health risk if you snore a lot.

Below are few reasons why this sleeping disorder may prove to be life-threatening.

Gastroesophageal reflux disease or GERD, as it is commonly known, is a condition in which liquids in the stomach flow back into the esophagus because of relaxation of the lower esophageal sphincter.

This may also happen because of the changing pressure patterns caused due to snoring.

There has been a common link between GERD and sleep apnea – obesity.

It has been found out that loss in weight can cause relief in both health conditions.

Moreover, as mentioned earlier, men are more likely to snore than women.

So, if you have been wondering what causes snoring in females, let me tell you that obesity is one of them.

To clarify, a lot of muscle mass around their neck and chest area makes it difficult to breathe hence snoring.

Therefore, if a woman is suffering from obesity she is more likely to snore too.

There have been studies showing that sleep apnea is associated with a higher risk of cardiovascular diseases.

These include High blood pressure and Coronary artery disease.

Both of these are responsible for heart attacks, which proved to be fatal.

Researchers show that people having sleep apnea are twice as likely to have fatal as well as non-fatal heart attacks as compared to healthy people.

Sleep apnea affects the conductive system of the heart.

Long-term sleep apnea may also cause the enlargement of the left atrium of the heart.

This may cause the person to develop an irregular rhythm pattern of the heartbeat.

This condition is itself called Arrhythmia.

Atrial fibrillation is the most common type of Arrhythmia that affects people suffering from sleep apnea.

There have been studies that have linked stroke to severe sleep apnea.

There is a health condition called carotid atherosclerosis, in which the arteries of the neck become narrow due to the deposition of fat, also known as plaque.

The study found a strong link between the intensity of snoring and carotid atherosclerosis.

This means the louder you snore, the greater your long-term risk of a stroke.

People with health conditions like high blood pressure are at greater risk.

Are you one of those who often get up at night to pee?

This has been closely linked with sleep apnea.

Nocturia is a condition in which a person gets up frequently at night to urinate.

This has also been related to loss of bladder control.

Studies have found that there is an association between nocturia and sleep apnea in middle-aged men.

Disturbed sleep can ruin your day.

You might feel sleepy and drowsy throughout the day and due to work commitments, you will not be able to complete your sleep.

This may lead to severe depression too.

It has been medically established that irregular sleeping patterns or incomplete sleep can cause depression.

And severe snoring is bound to disrupt your sleep.

Talking about mental health, women dealing with menopause or depression during perimenopause have also been found to snore.

Like other female health problems, menopause also is the cause of snoring in females.

Note: Check out for more causes of snoring in females and how to stop snoring as well.

Your cranky mood will affect your sexual desires.

Not only will it decrease your desire for sexual intercourse, but it will also lessen your satisfaction from these experiences.

Disrupted sleep due to snoring mat leaves you fatigued throughout the day and will affect your mood.

Though snoring becomes quite common during pregnancy, mainly due to the gain in weight, you should see a doctor if the situation is severe and consistent.

Although there has been little research on the snoring causes and effects the observations seem to show certain proportionality.

Snoring is not an uncommon health condition.

It happens with most of us.

But there is a fine line between casual snores and severe sleep apnea.

It is a condition that shouldn’t go undiagnosed and untreated.

This condition, apart from itself being so harmful, is also responsible for an increased risk of so many other diseases.

Hence, it should be treated within days of diagnosis.

Horizon Clinics is your ally in making all the right decisions for optimum physical and mental well-being. Stay connected to discover the latest scoop on diet plans, workouts, disease management, and healthcare products along with trending updates on research news. View all posts by Horizon Clinics